Climate change is expected to have a negative impact on the prevention and control of vector-borne diseases, like Malaria, Dengue, Chikungunya, Filariasis, Japanese Encefalitis and visceral Leishmaniasis.

Because arthropods and other vectors are cold-blooded animals, it is expected that vector abundance, survival and feeding activity will increase with rising temperatures, as well as the rate of development of pathogens within these vectors.

An example of a mosquito-borne disease that currently is on the rise in India is Dengue. The Extrinsic Incubation Period or EIP (the time the virus needs in the mosquito to multiply and become infective when the mosquito bites its next victim) of the dengue virus has been found to be inversely associated with the ambient temperature. At higher temperatures, the Dengue virus replicates faster, and the EIP increases the probability of a higher proportion of mosquitoes becoming infective during their life span. The same also applies to malaria that is transmitted by another mosquito family. It is also clear that socio-economic factors and living conditions play a key role in disease risk and disease transmission. Therefore, in CHARISMA we combine information allowing us to map the presence of a vector and living conditions of people living in cities with information from public health authorities to model disease risk at the ward level.

The ultimate objective is to develop a spatial decision support system that is ran by urban public authorities to plan vector and disease monitoring and control. A mock-up example of such a system applied to malaria is given in the figure aside. 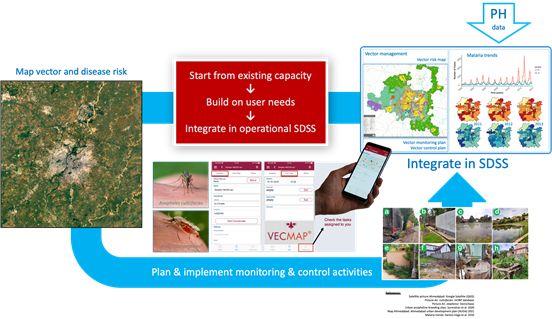